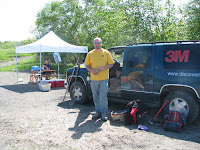 Saturday was our Dig Launch and it turned out to be a fantastic day for it! There were a few clouds, but the afternoon was sunny and warm. Anita and Joey brought out some tents and a picnic table into the field so people could have some shade and just relax. Coolers full of drinks and snacks lay within reach and we even brought a port-a-potty so that our participants were never in need of anything! Field volunteers Ted and Joe helped teach our participants to dig and to identify fossils and Ted sledge hammered in the first railway spike of the season with great pomp and ceremony.

﻿ ﻿
Some that came out were very prepared for the dig. There was one young man that was so prepared he even brought his own tools! He was a future paleontologist in the making. One group discovered some fossils sometime around lunch! I know it was an enjoyable experience for all. We had lots of people (over 80) come out to our dig site and our bus driver, Cam, and Matt were busy every hour giving people a tour through the Manitoba Escarpment as they wound their way up to the site over bumpy gravel roads.
﻿﻿
Lisa and I stayed in the museum conducting the free museum tours. We were kept very busy too as our groups swelled from small groups of 4 or 5 to groups of 20. I recall that I started with one group and there were only 3 at the start. By the end, I had around 25 people. It was awesome and we had such a blast! It was also challenging because we had to condense our normal 45 or 50 minute tours into 30 minutes (not as easy as it sounds!) and then add a 15 minute VIP addition: the collection room. We had to make sure that everyone was out in time for the bus and although it was hard sometimes, we managed to pull it off without a hitch! 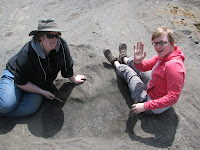 Tyler and Katie managed the front and took waiver forms while a few of our wonderful volunteers, Jeanette and Linda worked with the kids and took in registration forms respectively. We all had our jobs and the day went smoothly! Everyone seemed to have a great time and Bruce the Mascot even made his appearances around town at the Block Party. 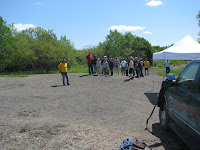 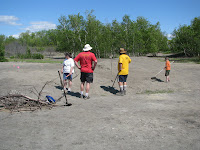 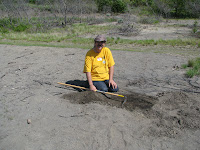 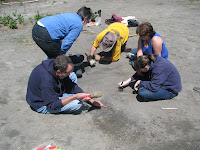