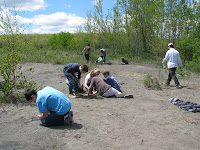 Wednesday was my first dig tour of this week. I had a large and great group full of enthusiastic kids who were eager to learn. The first fossil was found almost immediately: within 20 minutes of arriving there! Two young boys found a possible fish rib fragment with a hole in it. We hypothesized that it was a tooth mark as the hole was on both sides as if someone (or something) had bit down on both sides. Possibly a mosasaur trying to have some fish for lunch! The second fossil was found shortly after that by two young ladies. It was broken and therefore unidentifiable, but it was still exciting nevertheless! Three more finds followed in rapid succession as our budding paleontologists worked hard to each have their own find. Unfortunately for one group of boys, their find happened to be an anthill full of red ants. Needless to say, they got out of that area pretty quickly!
﻿ ﻿
After the dig I followed Joey, Anita and Ted to our other dig site and we got down to work right away examining the Gammon Ferruginous rocks and moving away the top layers. It was a beautiful day out and while the small stream flowed merrily through the layers of rock, we worked for hours unearthing some more fossils. Joey also bagged some pieces of a fish caudal (tail) fin that had only recently been found.
﻿﻿ 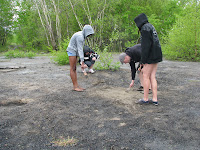 Thursday we had a smaller group come out. It was an interesting day! The weather made things uneasy for a while, but the kids were absolute troopers and despite the muddy conditions, they continued on with the dig as planned. The morning had started out beautifully; sunny and clear. As soon as we wanted to head out to our dig site the sky darkened and lightning flashed. It started to pour almost immediately and the thunder rolled. The rain, however, stopped again pretty quickly so left it up to the class if they wanted to go out and they decided to move forward with the dig. The site was muddy on the topsoil, but not even an inch down, there was dry dirt. The kids managed to dig themselves little sitting spots that were dry and settled down to dig. It wasn’t long before one of the boys found a fossil! It was very exciting as it might have been a part of a turtle! It was a great discovery for the day and the rest of the afternoon was warm and perfect.
﻿
﻿

John Tossot said…
what you lastly found? fossils for kids
5:20 am