Kathryn's Contemplations on the Chaos 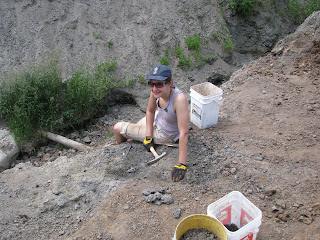 Hi! My name is Kathryn Lapenskie and I am majoring in geology at the University of Manitoba. Here is what I have to say-- the last two weeks at the CFDC have been busy and exciting! On Monday July 12th a film crew from the Daily Planet show on the Discovery Channel came out to take some footage of our "Xiphactinus Killzone." They spoke to the paleontologists from the museum about the fossils and were able to interview Jim Bamburak from the Manitoba Geological Survey who talked about the geological significance of this site. It was very exciting and fun to have the film crew down and we will post in the future as to when we will be featured on Daily Planet.
The rest of the week was spent in preparation for our official press release on the "Xiphactinus Killzone." Our field crew spent a lot of time at the site continuing to prep fossils and removing more overburden. Friday morning we sent out information to newspapers and news stations in Winnipeg about our big dig site and we had a huge rush of camera crews and journalists out to the site that day to interview our field crew and get some footage of the fossils.
We also had an exciting Monday-Tuesday July 19 and 20 when Jim Bamburak came out to the museum again to go on a “geology field trip” around some of our sites on the Manitoba Escarpment. Jim is very interested in researching the Gammon Ferruginous Member of the Pierre Shale Formation and was exploring many of our sites to find this elusive unit of rock. Jim has confirmed the Gammon Member at several of our sites including the "Xiphactinus Killzone." We also spent some time exploring the Boyne Member of the Carlile Formation and found a well preserved shark tooth and found multiple thin beds of coquina, a sedimentary rock composed almost entirely of shells and a small amount of cement. We did a lot of rock climbing and collected a lot of samples for our collection.
Also! I've continued to find more mosasaur from a skeleton we've been excavating since the beginning of June. AND! Because this skeleton is so significant (and it keeps getting bigger) we get to name it! If you have an idea, comment on this blog and your name could be picked and credited!