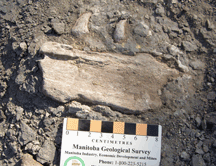 But without a doubt, my best memory of the summer will be the finding of Angus. I woke up that morning and thought one thing. I'm going to find a Mosasaur today. I had no idea that I was right. Positive thinking I guess. The group was a pleasant family from Winnipeg, the LaChance family. Very interested and more than excited at the idea of getting to find fossils. We headed up to the museum property for the afternoon. there was one quarry that I was dying to dig at because no one else had dug there before. it was a new quarry that a backhoe had dug up a year earlier. We passed by it hundreds of times but that day I was determined to find something. It was really hot, we plunked down in the shade, hoping to find the discovery of the decade in the comfort of the shade. Of course that would be too easy. The family started out digging around the quarry, and I started surface collecting, just walking around trying to see what I could on the surface. It didn't take long for me to spot a small fossil sticking out of the side of a small rise in the shale. I grabbed the one woman, Chantel Gibson, and ask her if she would like to work on a fossil. About 10 minutes later we had the first find of Angus. It was what I thought would be a quadrate bone. Once the first fossil was found, everyone wanted in on the action. I did a little digging but mostly I supervised, making sure that they didn't damage any of the fossils they found. As soon as the LaChance family started digging, fossils appeared everywhere. at first it was just fragments, but then when Doris LaChance found the first teeth, then I realized the scope of the find. It was a beautiful jaw with two intact teeth. And they were huge. I knew right away that it was a huge find. I even did a little prospector dance in celebration. They kept finding so much fossil material that I couldn't keep up. I was everywhere making sure that the fossils weren't damaged by careless hands. But this family was the best excavators I’ve seen. Their patience, steady hands, and enthusiasm! Before the day was done they had excavated over 23 different fossils, from teeth to back bones to ribs. And we had a name. Chantel and her husband Scott live in Scotland. So a good Scottish name seemed appropriate. Jokingly I suggested Angus. And it stuck. I wish I could have named it Charlie or Ishmael. But it was Chantel's discovery. So Angus it was.

But everyone was overflowing with excitement. At the time I had no idea the how far the find would go. But 5 o'clock rolled around and we had to return to the museum. As hard as it was to leave Angus, I knew that I would be back as soon as I could. Over the next month we continued to expand the site, with just our field crew, and also other tours. The one day I kept finding tooth after tooth. It was so awesome. Once Joey and Anita, our paleontologists, identified the size and type of Mosasaur, Dave, our director, sent out a press release. The same afternoon, CTV and the Free Press arrived to film it and write about it. I barely had time to tell my family. Before I knew I was on the front page and on the national and local news. My friends are all calling me to congratulate me. It still blows my mind. Largest fossil find in thirty years, second largest Mosasaur in Canada. I never thought any of this while we worked on it. It was just a cool find. Nothing big. And now everyone credits me with the discovery. So I want to set the record straight right now. It was the LaChance family, not me that made the find. They found it and named it. I was just the staff member lucky enough to be there. It is funny though. Their family name means "the luck" And we are all very lucky to find such a big find.