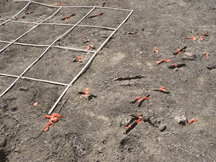 A fact that is likely unknown to many in this area is that there are actually three different kinds of shale in this area, two of which we find fossils in. The CFDC digs in a formation of shale known as the Pierre Shale Formation. The Pierre Shale Formation is made up of three members; or layers perhaps. Above: Death Assembly
These three layers, going from the top to the bottom are known as the Odanah Member, the Millwood Member, and the Pembina Member.

Most of the fossils in the CFDC have been extracted from the Pembina Member of the Pierre Shale Formation. These fossils are usually pinky-white in color and are very crumbly. Three exciting finds that have occurred in the Pembina Member this field season!

First off, Heather Nelson, a fellow field tchnician of the CFDC stumbled across the fossils of a plesiosaur who she named "Ianto." Heather's discovery yielded at least ten vertebrae and a limb bone, not to mention a couple fish vertebrae thrown into the mix.

Secondly, board member Joe Brown came across what is known as a death assembly. The death assembly contained fossils from mosasaurs, fish, sharks, and birds, and was the first multi-species death assembly found in this area. This area was first dug in by school groups, who uncovered small sections of this find. So far over 150 fossils have been excavated and evtracted from the site, with many still waiting to be found!

Finally, as the field season was closing down, Reid Graham led a tour ground up to the CFDC property on a dig tour. They ended up discovering "Angus," the second largest mosasaur in Manitoba. This was a huge find and the media lapped it up. The find is still being worked on and will continue to be worked on next field season.

The CFDC has also discovered fossils in the Millwood Member. These fossils are very different from the fossils found in the Pembina Member. Fossils found here are very dark in color, in some cases jet black. They are smooth, and are often in very nice condition. Millwood shale is a lot more more solid than shale from the Pembina member, which makes the excavation of fossils extremely difficult. That is why most of these fossils have been collected right from the surface.

Several beautiful fossils have been found in the Millwood Member. So far two Hesperornis vertebrae, two mosasaur vertebrae, mosasaur jaw fragments, squid pen fragments, a plesiosaur vertebra, and several fish vertebra have been found and brought back to the museum. These finds are all jet black and extremely smooth, and were all found above ground lying on the surface.

I would like to continue searching in the Millwood Member, as the fossils are in great condition, and the area is practically "untapped."