A Plesiosaur at the End of the Road! It was the last week of June and we had high hopes of finding an amazing specimen, but torrential rain managed to dampen our spirits. At the beginning of the month, I constructed a wish list to boost morale and to provide good "field" karma. On the list are five rare specimens that have not yet been found. The list includes a juvenile mosasaur, a complete hesperonis, a giant archelon shell, a shark with teeth, and a plesiosaur with an ammonite in its belly. You might think we're crazy, but we're optimistic!

So at the beginning of this week, the fossil crew was pumped to find one of the five allusive specimens. However, it rained and rained... and rained! Could the rain have been caused from global warming? Perhaps bad karma? Anything could have caused the mini monsoon, but one thing we were certain on, it was unexpected. There was so much rain, a creek developed between one of our dig sites, blocking the passage way. We cringed as we heard violent winds tore up the area, probably damaging our recent finds. Things looked like they were going the wrong direction, but there was light at the end of the tunnel. At the end of the week, the rain finally stopped pouring. It was non stop sunshine, perfect for our staff dig. We packed up the museum van again, with even higher hopes of finding one of the wish list specimens. We headed to the CFDC property, where Anita cleared our first new quarry. This site is virtually untouched. Within the first ten minutes, the staff started to uncover fossils! Little did we know, Yvonne, our administrative clerk, is an expert at finding fossils. She was finding them left and right. Yvonne has my vote for paleo star of the week! Although the rain prevented us to get a good head start in the field season, we managed to uncover what we hope is a fish specimen.

This fish will remind us that when life throws you a road block, there might be a plesiosaur, with an ammonite in its belly, at the end of the road! 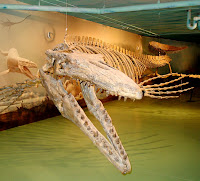 Since the CFDC is most famous for its mosasaurs (I'm sure most of you have heard of Bruce, for example), I thought I'd focus on them in this week's blog for the purposes of clarifying what they actually are and why they're so impressive and important. As you'll soon see, there's a lot more to them than being big, swimming lizards with lots of teeth. Bruce, at 43 feet long, is the biggest Tylosaur in Canada. To begin: when we refer to a "mosasaur", we usually mean a extinct member of the Mosasauridae family of reptiles; three of its six known subfamilies are represented at our museum. An analogy I often use during tours is to liken mosasaurs to bears; just like there are many different kinds of bears, there are all sorts of different mosasaurs! The smallest kind of mosasaur we find is called Clidastes , which could grow to about 13-15 feet long, while our biggest mosasaurs, which were called Tylosaurs (Bruce is one of these) could grow up to 43